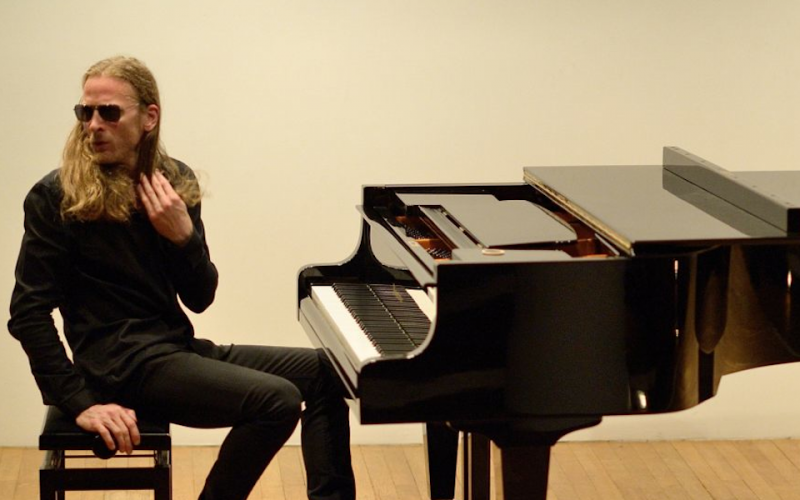 Pete Drungle is a Bessie Award-winning composer and pianist who has made music with Ornette Coleman, The Kronos Quartet, Yoko Ono, the Decoding Society and many others; he has composed scores for theater, television, film and video, and has collaborated with visual and performance artists including Michael Portnoy, Rudolf Stingel, Marianne Vitale, Lilibeth Cuenca Rasmussen, Agathe Snow and others. His music compositions, performances and sound design have accompanied exhibitions in Art-Basel Miami, the Whitney Biennial, and Performa 07, 09 and 11. As a pianist, Drungle is an intrepid, adventurous improviser – possibly best exemplified by his legendary 24-HOUR CONTINUOUS SOLO PIANO IMPROVISATION; Wire magazine’s Alan Licht remarked, “… In as much as free improvisation can be a real-time, stream of consciousness expression, Drungle’s epic event pushed it well beyond the limits usually imposed by the customary concert timetable…

That he was still functioning at a high level of creativity after 23 hours pays new testimony to the improvisational mindset. Drungle contributed the truest experiment in concert as performance art that PERFORMA had to offer.”

Randy Weston’s presence and teaching will be forever remembered! Brooklyn’s jazz community will ensure his spirit lives on, as we pay tribute to his life in the years to come.

Randy Weston was born in Brooklyn, New York, on April 6, 1926, to a Panamanian father and a mother originally from Virginia. Unlike many African Americans of his generation who acknowledged little connection between themselves and the mother continent, Weston proudly proclaimed himself an African from an early age, thanks largely to the influence of his father, Frank Edward Weston.

After contributing seven decades of musical direction and genius, Randy Weston remains one of the world’s foremost pianists and composers today, a true innovator and visionary.

Encompassing the vast rhythmic heritage of Africa, his global creations musically continue to inform and inspire. “Weston has the biggest sound of any jazz pianist since Ellington and Monk, as well as the richest most inventive beat,” states jazz critic Stanley Crouch, “but his art is more than projection and time; it’s the result of a studious and inspired intelligence…an intelligence that is creating a fresh synthesis of African elements with jazz technique.” 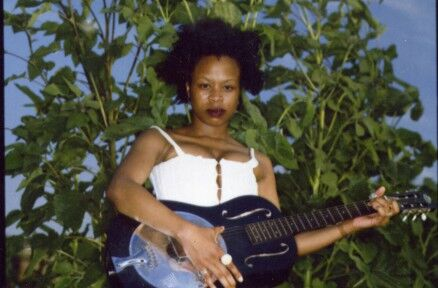 Queen Esther is an award-winning vocalist, songwriter, librettist, playwright, actor and recording artist. She received a BA from The New School (Screenwriting) and flourished in the alt-music/alt-theater scene. After forming the critically acclaimed avant-blues duo Hoosegow (Mighty/Homestead) with guitarist, Elliot Sharp, she beat out more than 6,000 hopefuls to land a plum role in the original cast of the first national tour of the Broadway musical RENT. Career highlights include a weekly hour-long USO-style variety show that welcomed Broadway performers and showfolk to entertain the Ground Zero relief workers for free; a 2002 AUDELCO-award nomination for her star turn in George C. Wolfe’s new musical Harlem Song; the 2008 Grand Prize in the Jazzmobile Jazz Vocal Competition; headlining at The Apollo Theater with her self-penned musical The Billie Holiday Project, featuring her jazz quintet The Hot Five. Queen Esther continues to tour internationally with Mr. James “Blood” Ulmer in various configurations, including The Black Rock Experience as well as her own projects. Ohad Naharin, artistic director of the Batsheva Dance Company, is regarded as one of the most important choreographers in the world. Following him during a critical turning point in his personal life, this spirited and insightful documentary, “Mr. Gaga,” will introduce you to a man with great artistic integrity and extraordinary vision. Filmed over a period of eight years, director, Tomer Heymann mixes intimate rehearsals with unseen footage and breathtaking dance sequences. The evening will begin with a performance by the electrifyingly uncompromising, Brooklyn-based contemporary company, GALLIM. Making their SummerStage debut, the company, which is celebrating its 10th anniversary, is led by former Batsheva Ensemble member, Andrea Miller, who was recently named the 2017/2018 Artist in Residence at The Metropolitan Museum of Art, the first choreographer to ever hold that distinction.

Entry to the main show is free and does not require RSVP. Admission is granted on a first-come, first-served basis until capacity is reached.

WORD*ROCK*SWORD: A Musical Celebration of Women’s Lives, All Are Welcome!

Is the heart of WORD*ROCK*SWORD: A Festival Exploration of Women’s Lives VIII ( wordrocksword.com ) an 8 Day community festival founded in 2011 by Toshi Reagon ( toshireagon.com ). This musical celebration has become a dedicated meeting ground for audience members and musicians alike. It is held together by a band features Allison Miller- drums, Christelle Durandy- percussion, Alex Nolan- guitar, Ganessa James-bass, Maya Kronfeld- keys, Lyris Hung and Juliette Jones- Violin. Nona Hendryx, Tamar-kali, Joan As Police Woman, and Morley are the root artist that everything else circulates around. It is 3 hours of a continuous congregational voice. Always amazing, Always full of surprise, Always just what you needed.

THE ANNUAL ATLANTIC ANTIC™, presented by the Atlantic Avenue Local Development Corporation (AALDC), is the oldest and largest street festival in Brooklyn, New York! On this beautiful autumn day in Brooklyn, the Atlantic Antic™ brings together hundreds of thousands of people to Atlantic Avenue to celebrate the longstanding tradition of food, art, music, shopping, festivities, and fun!

This event is family-friendly! 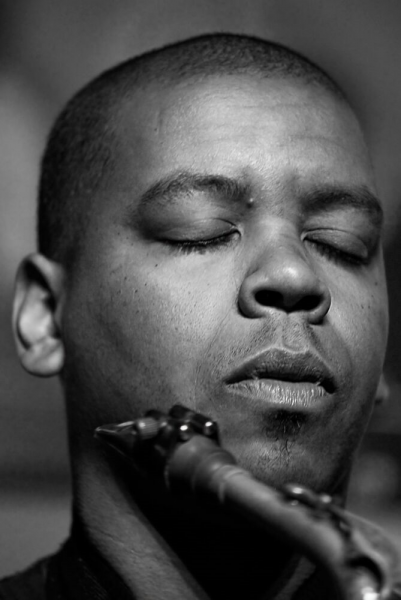 New York native, bassist Keith Witty has straddled the worlds of Hip-Hop, popular music forms, and Jazz’s Avante Garde in his young career. Before graduating in 2000 from Wesleyan University, he made his recording debut with the Anthony Braxton Quartet, followed by work in the bands of Guillermo E. Brown and David S. Ware. Keith’s first engagement with Ware was the Jazz at Lincoln Center’s Hall of Fame induction ceremony for Sonny Rollins and Max Roach, with both legends in attendance. In 2007, Keith formally joined Ware’s new quartet. That same year, he joined the touring band of Grammy-nominated singer and song-writer Amel Larrieux, with whom he has toured extensively. In 2010, Keith joined the band of acclaimed East African vocalist, Somi, and simultaneously, Keith has collaborated with some of the most innovative musicians of Jazz’s upcoming generation, playing in bands led by Matana Roberts, Taylor Ho Bynum, Pyeng Threadgill, and Jonathan Finlayson. A dedicated educator, Keith was the New York City Opera Education Program’s composer-in-residence for 10 years.

Jonathan Finlayson has been recognized by the New York Times as “…an incisive and often surprising trumpeter,” who is …fascinated with composition.” Finlayson is a disciple of the saxophonist/composer/conceptualist, Steve Coleman, having joined his band Five Elements in 2000 at the age of 18. He is widely admired for his ability to tackle cutting-edge musical concepts with aplomb. Finlayson has performed and recorded in groups led by Craig Taborn and Henry Threadgill and played alongside notables such as Von Freeman, Jason Moran and Vijay Iyer.

Watch this sci-fi adventure as Jyn (Felicity Jones), the daughter of Galen Erso (Mads Mikkelsen) an Imperial scientist, joins the Rebel Alliance in a daring plot to steal the Death Star plans.