Lincoln Center’s Out-of-Doors: Made in NYC: Celebrating the 50th Anniversary of the Center for Traditional Music and Dance

For this 50th birthday celebration, the Center for Traditional Music and Dance calls upon some of its favorite artists—many of whom got their start with CTMD—for an eclectic, energetic afternoon of music reflecting the diversity of New York City’s neighborhoods. Among the guests are klezmer pioneer Andy Statman, Irish-American supergroup Cherish the Ladies, the groundbreaking Afro-Colombian band, Grupo Rebolu, and the miraculous Guinean dancer, drummer, and singer, Sidiki Conde and his group Tokounou.

For 50 years, Dance Theatre of Harlem has been spreading a message of empowerment through the arts. In recent years, the historic company has used its superlative, multi-ethnic group of artists to present a powerful vision for ballet in the 21st century. For this celebratory evening, the company dances signature works that embody this impressive legacy. The magic of the night begins with London-born, Paris-based singer-songwriter ALA.NI, who brings the spirit of Billie Holiday and Judy Garland to her jewel box of intimate songs.

Summer in the Square Movie Nights

Through poetry, music, and stories, a powerful community of artist-activists give voice to the everyday heroes working to uphold and extend LGBTQ, women’s, civil, immigrant, and human rights.

Dancing and singing are encouraged at this interactive performance by dynamic duo, Chen Lo and Asante Amin. Together with an MC, a DJ, horns, and vocalists, Lo and Amin chronicle the joys of travel and cultural exploration using their signature blend of hip-hop, jazz, funk, soul, and Afrobeat rhythms. 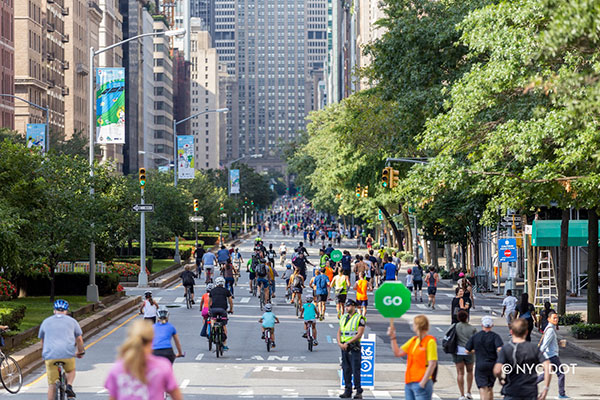 On the first three Saturdays in August between the hours of 7 am and 1 pm, nearly seven miles of New York City’s streets are open to the public to play, run, walk and bike. Summer Streets extends from the Brooklyn Bridge to Central Park, along Park Avenue and connecting streets, with easy access from all points in New York City, allowing participants to plan a trip as long or short as they wish. All activities at Summer Streets are free of charge, and designed for people of all ages and ability levels to share the streets respectfully.

Summer Streets is a project of the New York City Department of Transportation.

OkayAfrica—the online hub of the African New Wave—brings two superstars and one of the top Afrobeat DJs in the world to Damrosch Park for this high-octane party. Drawing on everything from Ghanaian highlife, Ivorian coupé-décalé, and American hip-hop, the Nigerian “Queen of Afrobeats” Yemi Alade (Fader) lights up the stage with power vocals and irrepressible charisma. DJ Maphorisa, the multiplatinum South African producer known for his banging blend of house and Afropop, and New York’s own DJ Tunez, known in NYC for his Blackout parties and worldwide for collaborations with Wizkid, Davido, and more, will keep you feeling great all night long.

Ahmed Abdullah was born and raised in Harlem. In 2016, he performed in Harlem for the first time with his own band. Ahmed has been leading a band since 1972. Over the years he has worked with or recorded with bands led by Sam Rivers, Sun Ra, Rashied Ali, Ed Blackwell, Billy Bang, Arthur Blythe and Hamiet Bluiett. Ahmed has been involved with notable collective ensembles like The Melodic Art-Tet, The Group and NAM. Abdullah has twelve recordings as a leader and is on at least other 25 recordings with Sun Ra and the Arkestra as well as recordings with the aforementioned artists. Besides playing trumpet, composing, singing, curating and educating, Ahmed is also a writer and has written a thesis that defines the art-form he is concerned with as Jazz: A Music of the Spirit. Ahmed currently teaches a Sun Ra Music and Philosophy course at the New School and is a NYC Department of Education Fellow teaching music to children.

Michael Wimberly is a composer, percussionist, educator, and music producer based in Harlem, New York. Having recorded and toured internationally with innovative artists such as Charles Gayle, Steve Coleman, William Parker, Cooper-Moore, David Murray, and many others, Michael has earned his place in the pantheon of cutting-edge, avant-garde jazz drummers. As a djembe soloist Wimberly has been featured with Europe’s Rundfunk, Tonkuntsler, Leipzig, and the International Regions Symphony Orchestra performing “African Oratorio” by composer Daniel Schnyder. As a composer, Wimberly’s symphonic work, “Kora Saba,” has been performed by the Yakima Chamber Orchestra in Yakima, Washington, and the Sage City Symphony in Bennington, Vermont. His compositions also appear in dance companies Urban Bush Women, Joffrey Ballet, Alvin Ailey, Philadanco, Forces of Nature, Ailey II, Complexions, Ballet Noir, Alpha Omega, BalEthinic, Purelements, and The National Song and Dance Company of Mozambique. As president of Together with Music, and creator of the international percussion event Power of Drum, Wimberly is actively engaged with an alternative arts program whose mission is to make accessible to all youth, the learning of music and its relation to all the arts and sciences.