We Come In Peace by Huma Bhabha 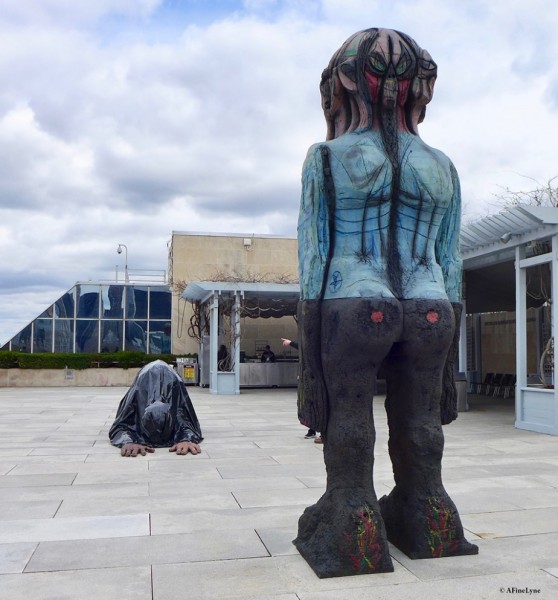 Bhabha describes her sculptures as “characters” “that, through their materiality, rough construction, and references to the history of sculpture, become rich screens for projections of psychological depth.” All of her sculptures incorporate art-historical references.

We Come in Peace by Poughkeepsie-based artist, Huma Bhabha arrived on The Roof Garden of the MET this week. This site-specific installation addresses themes of colonialism, war, displacement, and memories of place. Her ‘haunting figures’ were created using found materials such as clay, Styrofoam, cork and cast in bronze.

Her fondness for science-fiction and horror films have contributed to her artistic thought-process. In fact, the title of this installation ~ We Come in Peace ~ is taken from a line in the 1951 sci-fi film, ‘The Day the Earth Stood Still.’

Huma Bhabha, We Come in Peace will be on view from April 17 through October 28, 2018 on The Met’s Iris and B. Gerald Cantor Roof Garden. This is the sixth in a series of site-specific commissions for the outdoor space.

Cost: General admission is $25 for adults; $17 for seniors; $12 for students; and free for Members, Patrons, and children under 12. General admission tickets include exhibitions and are valid for three consecutive days at The Met Fifth Avenue, The Met Breuer, and The Met Cloisters. Open Seven Days a Week: Sunday–Thursday: 10 am–5:30 pm*; Friday and Saturday: 10 am–9 pm*.

In 1996 Adrian Piper wrote, “It seemed that the more clearly and abstractly I learned to think, the more clearly I was able to hear my gut telling me what I needed to do, and the more pressing it became to do it.” Since the 1960s, this uncompromising artist and philosopher has explored the potential of Conceptual art—work in which the concepts behind the art takes precedence over the physical object—to challenge our assumptions about the social structures that shape the world around us. Often drawing from her personal and professional experiences, Piper’s influential work has directly addressed gender, race, xenophobia, and, more recently, social engagement and self-transcendence.

The all-day women’s business conference is free and open to the public. Additionally, admission to various segments of the conference are available for individual fee or a package rate. There’s the Honorees Breakfast, Conference Kickoff, The Ultimate Pitch, Keynote Speaker, The Celebration Circle and an evening Reception.

Cost: Conference is free and open to the public. $49 to $249 – prices vary for two or more of the following: Honorees Breakfast, The Ultimate Pitch/Pitch Party, a Booth and an evening Reception.

Every year, the NPRDP hosts a series of public events leading up to the culmination of the Parade on the second Sunday of June. Our events and programs are designed to celebrate and advance Art, Culture and Education in the Puerto Rican community, both in Puerto Rico and the mainland U.S.

The National Puerto Rican Day Parade’s theme Un Pueblo, Muchas Voces (One Nation, Many Voices) celebrates the creativity and diversity of thought in Puerto Rico and across the diaspora.

The National Puerto Rican Day celebrates and honors the leaders, educators, artists, and celebrities that have left a cultural footprint on this nation.

Get to know the pioneering women of color who helped make Harlem a world-famous center of social activism, cultural experiment, and progressive politics throughout the twentieth century. On this multi-media bus tour, historian Dominique Jean-Louis brings to life the stories of visionary local heroines including Ella Baker, Antonia Pantoja, and Pearl Primus through historical tales, vivid anecdotes and recorded music. We’ll visit the street corners, buildings, public places and neighborhood spots where a diverse group of women made history – with repercussions that extended far beyond Harlem’s streets to the world beyond. Afterwards, we will return to the Museum for lunch on the Terrace (optional).

Paulin Vieyra captures Ousmane Sembène, one of the greatest filmmakers of Africa, during the filming of Ceddo. L’Envers du Decor was completed after four years of production. As for Ceddo, it would be censored under the Senghor regime and until 1983 by the Senegalese authorities.

Lamb (U.S. Premiere)
Paulin Soumanou Vieyra, Senegal, 1963, 18 min
This documentary captures the sport of traditional wrestling, called ‘lamb’ in Wolof, popular in Senegal. Vieyra presents the rigorous rules of the sport and training practices by the sea. The Dakar Arena serves as a showcase for the battles in the film, where every spectator can bet on his favorite wrestler in a festive atmosphere. Fifty years ago, Lamb was in the official selection of the Cannes Film Festival, a first for a film from sub-Saharan Africa.

A Nation Was Born (U.S. Premiere)
Paulin Soumanou Vieyra, Senegal, 1961, 25 min
In 1958, Vieyra set up a special office dedicated to film in Senegal, which, after the independence (1960), became the base of the country’s cinematography. A Nation Was Born is a historical portrait of Vieyra’s homeland showing scenes from pre-colonial traditions, represented mainly by dance, to the exploitative European domination, to the new beginning represented by the celebration of the republic.

Tony winner, Ruben Santiago-Hudson (Jitney, The Piano Lesson) returns to Shakespeare in the Park to direct a sumptuous new production of OTHELLO. Set amid war and palace intrigue in the 17th-century Mediterranean, this classic drama about a noble Black Venetian general whose marriage is sabotaged by theater’s most infamous villain, Iago, remains Shakespeare’s most urgent and relevant tragedy today. A lush, romantic vision gives way to the violent tangle of love and jealousy, race and revenge in this must-see production of Shakespeare’s great tragedy, OTHELLO.

Free tickets are available for every public performance. For information on how to access free tickets, see the link.

Learn, play, explore, and grow during El Museo’s monthly bilingual program for our tiniest visitors. Join us on the first Saturday and Wednesday of every month as we embark on an adventure to discover new ways of interacting with art and each other. With time for play, storytelling, museum walk and art making, Coquí Club provides a fun and active way to explore El Museo and enjoy creative themes together. Program length : 60 minutes

Recommended for children ages 1-4 and their caregivers. Dress for a mess!

No reservation required, but space is limited. First come, first served. This program is not intended for school groups.

Meet Afua, a modern day Ghanaian woman with plans to marry her fiancé Nii. The only problem is, Afua is not sure she believes in marriage. Her divorced parents, an unbearable stepmother, and Nii’s bickering married parents, cause Afua to doubt the very thing planned for just a few weeks away: her wedding.

After watching Afua prance around town with her fiancé – selecting a cake, finalizing decorations and altering her dress – we then see her start questioning what makes a marriage truly work. And with nostalgic feelings for a former crush, Afua devises an unconventional plan to ensure that her and Nii embark on a long and happy marriage. However, the very plan devised to help them, is the same plan that may harm them – even before their intended “I do’s.” Q&A with Nicole Amarteifio.