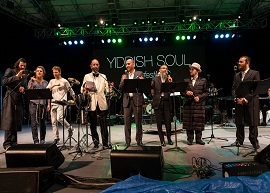 Yiddish Soul: A Concert of Cantorial and Chassidic Superstars

Incorporating contemporary musical styles and sensibilities, while keeping the message and the poetry pure and true to the ethical tenets of Judaism, modern orthodox music has swept up a generation of young Jewish music fans. The liturgical music of the Cantor has for centuries been the spiritual gateway for Jewish worshippers and communities in synagogues around the world. The virtuosity and deeply emotional artistry of the world’s great Cantors has been a passion of music aficionados from the earliest days of the recording and film media, when Cantors like the legendary Yosele Rosenblatt became models of vocal virtuosity. Today, this sound has crossed over into mainstream jazz and world music festivals and performing arts centers worldwide.

Presented in partnership with Kulturfest, a festival of international Jewish performing arts which is produced by the National Yiddish Theatre Folksbiene; Bryna Wasserman, Executive Director; Zalmen Mlotek Artistic Director, Christopher Massemine Executive Producer, and the Museum of Jewish Heritage, a Living Memorial to the Holocaust.