5/10/1950: Boston Celtics selected Chuck Cooper, the first African American play drafted to play in the NBA, as the second pick of the second round by the Boston Celtics. Cooper was drafted by Celtics’ owner Walter A. Brown and played for coach Red Auerbach. He made his NBA debut on November 1, 1950 against the Fort Wayne Pistons.  He played four years with the Celtics, #onthisday 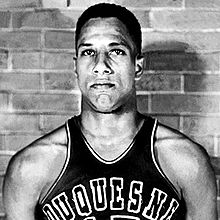