Steve Swell has been an active member of the NYC music community since 1975. He has toured and recorded with many artists from mainstreamers such as Lionel Hampton and Buddy Rich to so called outsiders as Anthony Braxton, Bill Dixon, Cecil Taylor and William Parker. With over 40 CDs as a leader or co-leader, Steve is a featured artist on more than 100 other releases. He runs workshops around the world and is a teaching artist in the NYC public school system focusing on special needs children. Steve was nominated for Trombonist of the Year in 2008 & 2011 by the Jazz Journalists Association, selected Trombonist of the Year 2008 – 2010, 2012 and 2014 by the magazine El Intruso of Argentina, received the 2008 Jubilation Foundation Fellowship Award and selected by the Downbeat Critics Poll in the Trombone category from 2010 – 2014. Steve is a teaching artist through the American Composers Orchestra, Healing Arts Initiative, Mind-Builders Creative Arts Center, and the Jazz Foundation of America.

Violinist and composer of Greek origin, Elektra Kurtis was raised in Poland. She graduated from the Warsaw Conservatory, and Finnish Sibelius Academy of Music in Helsinki. She has performed throughout the US, Europe and Finland in numerous chamber ensembles, symphony orchestras, ethno-music ensembles, including her own group, Ensemble Elektra, a world jazz improvisational ensemble. Elektra has performed in concerts, theatrical and television productions, radio broadcasts and worked with such stellar artists as Lester Bowie, Gerry Mulligan, Paquitod’Rivera, Lionel Hampton, Shirley Horn, Ray Barreto, Max Roach, and the notable Arabic music master Simon Shaheen. Elektra played in trombonist Craig Harris’ jazz, hip-hop, rap, poetry and song project in Paris, and participated in a performance in 1997 with Nona Hendrix and Erykah Badu, among others. In 2002/03 she appeared in concerts with Henry Threadgill’s Aggregation Orb and with Butch Morris’ Skyscraper.

Howard Johnson with Friends and Neighbors

One of the top tuba soloists since the early ’60s, Howard Johnson is a very versatile player who not only plays tuba and baritone but other reeds and trumpet. He moved to New York in 1963, where he worked with Charles Mingus (1964-1966), Hank Crawford, and Archie Shepp. In 1966 he started a 20-year off-and-on association with Gil Evans. Johnson’s four-tuba group Substructure performed with Taj Mahal, and in the late ’70s he formed a different tuba band called Gravity that in 1996 finally had the opportunity to record (plus play at the Monterey Jazz Festival.) Howard Johnson has recorded with Hank Crawford (1983-1984), Jack DeJohnette’s Special Edition, Jimmy Heath, Bob Moses, George Gruntz’s Concert Jazz Band, and frequently with Evans’ orchestra, among others. 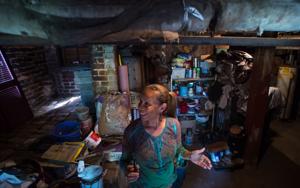 characteristic of nearby houses.

The answer came after a roofer visited the summit of the Anne Spencer House and Garden Museum.

There is, in fact, very little paint on the roof. Instead, “it’s a very pretty shade of rust,” said advisory board member Jane White.

Many may know the story of Anne Spencer — a wife, mother, gardener and Harlem Renaissance poet who called Pierce Street in Lynchburg home — but “people don’t know the story about the leaking pipes and the electric bills and the bad wiring,” said her granddaughter.

Anne Spencer’s home was constructed in 1903 by her husband, Edward Spencer. But after more than a century, the house is feeling the passage of time. The museum operates on an all-volunteer basis. At this time, 100 percent of the museum’s operating budget goes toward repairs, and the museum is seeking help from the public, either through financial or in-kind donations, to help the museum meet its extensive maintenance needs.

“People look at us from the outside … and it’s freshly painted and they come inside and it’s so neat and staged so nicely,” Spencer-Hester said.

“So they see that and it’s like being all dressed up and pretty,” she said.

“But who knows what’s underneath,” White added.

The rent is too damn high.

Rent has gone through the roof in some neighborhoods, rising a crazy 50% to 90% in some spots, according to an analysis by the Community Service Society, a nonpartisan anti-poverty group.

Rents rose 32% citywide since 2002, but in six neighborhoods in Manhattan and Brooklyn, median rent presented to recent movers has spiked by at least 50%, the survey found.

“The sharpest increases occurred in neighborhoods surrounding the traditionally high-rent area of Manhattan below Harlem,” the report states, noting that median rent in central Harlem has jumped a “shocking” 90% since 2002.

Harlem-born Linda Chaplin, 63, fears she may lose her $1,000-per-month apartment.

“That’s why the flavor of Harlem has changed. They try to outprice the people who grew up in this neighborhood,” the retired MTA clerk and mother of five said. “Your retirement, your Social Security is not going up, but your rent is.”

The findings come as rent stabilization laws are set to expire in a week, along with a huge 421-a tax break for developers designed to encourage affordable housing.

HAMILTON HEIGHTS —Mismanaged co-ops in Hamilton Heights, Harlem, and East Harlem owe the city more than $21.2 million in unpaid taxes and water and sewage bills, according to data obtained by DNAinfo. 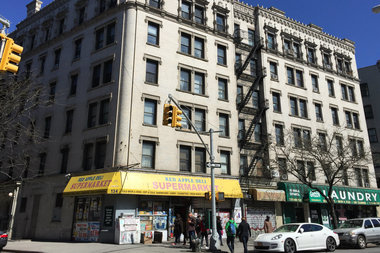 Most of the co-ops started as foreclosed properties owned by absentee landlords that the city sold to tenants to give low-income New Yorkers homeownership.

About 60 percent — 200 of 329 co-ops in Community Boards 9, 10 and 11— owe the city money, according to records from the city’s Department of Housing Preservation and Development.

“We are aware of significant issues regarding how the board has been managing the operations of the cooperative at 501 West 143rd Street,” an HPD spokesman said in a statement. “This [co-op] has been identified by HPD and [Department of Finance] as a candidate Third Party Transfer program.”

If placed on the program, every member of the co-op would lose ownership of their apartment and be forced to become renters. For Ronaldo Kiel, who has spent more than $200,000 to buy and renovate his apartment, that would mean a complete loss on his investment.

Artists in East Harlem, fed up with City bureaucracy,  launched “Guerrilla Gallery”, a wall commandeered and turned into an outdoor gallery after years of neglect.

The “Guerrilla Gallery” may be found on East 116th Street between Second and Third avenues.

Since launching in May with 10 pieces of art, its grown to include 25 paintings and drawings.  According to the founding artists, any East Harlem artist may add their own work to the wall under one condition: the work must be waterproof.

Kristy McCarthy, 32, a member of the Harlem Art Collective responsible for the wall,  spoke to DNA Info about the project, explaining that they were yet to receive permission from the City. So, they did it anyway.

The Studio Museum in Harlem, whose ambitions have long been checked by the limitations of its 1914 building, will construct a new $122 million home designed by the British architect David Adjaye on West 125th Street.

Plans for the new building, which will occupy the museum’s current lot near Adam Clayton Powell Jr. Boulevard, are to be announced Monday.

With the new space, the museum, for the first time in its nearly 47-year history, will have a physical space created expressly to meet its needs and serve its mission: fostering and displaying work by artists of African descent.

No more droning air-conditioners in the galleries. Or children sitting on the floor for educational programs. Or total shutdowns of the museum three times a year because the current process of changing exhibitions is so disruptive to its operations.

“We have outgrown the space,” said Thelma Golden, the museum’s director and chief curator since 2005. “Our program and our audience require us to answer those demands.”

The project also signifies the Studio Museum’s move from the margins to the mainstream, having started as a place that brought attention to black artists who had been largely ignored by major museums. Now black artists are better represented in many institutions.

“The museum was a radical gesture to address the exclusion of black artists from the canonical presentation of art history,” Ms. Golden said.

After evaluating several architects, the museum selected the New York-based Mr. Adjaye because of what Ms. Golden described as his sensitivity to artists as well as to the neighborhood. Born in Tanzania to Ghanaian parents, Mr. Adjaye conducted a 10-year architectural study of the capital cities of Africa that resulted in a 2010 photography exhibition in London, and his building projects include the Smithsonian’s National Museum of African American History and Culture in Washington, now under construction.

EAST HARLEM — Ten years ago, while living in Philadelphia, Darick Kennedy got drunk walked into a bookstore and tried to steal a book. 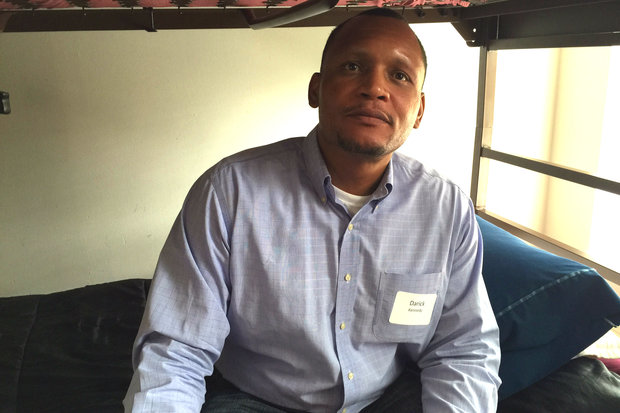 The stunt ended with him in handcuffs and three years probation. It was the start of a long journey filled with more run-ins with police and stints at halfway houses, he said.

“Throughout the next ten years I was in and out of trouble with the law,” he said. “When I finally was released from the halfway house in December 2014, I just ran wild. I got high for about two weeks.”

Today Kennedy, 41, is sober and living in East Harlem. He is one of 65 men who recently moved to a transitional living center on 315 East 115th St. He found a job as a janitor and is studying to go to HVAC school to start a new career.

“This is a very important occasion for us,” he said. “You are standing in front of the largest of the three.”

Kahlil Kwame Bell, having made nearly 90 recordings with numerous musical icons and legends as well as with his own talented band, has been called “one of the most prolific musicians in the industry today.” He plays over 1,000 percussion instruments and has experimented with wood and clay flutes. His musical output varies from jazz to rock to hip hop; from European classical to world music; from spirituals to spoken word accompaniments. His layering of sounds and instruments, sometimes blended with unique rhythms, reflects his view of the unity of cultures through music. His work for other musicians, as well as his renditions of his own compositions, can be heard almost daily on jazz and world music radio programs worldwide. Bell uses an innovative percussion instrument called the slappaphone, whose unusual sound captivates all who hear it. Asked about the instrument, Bell says, “The slappaphone called me when I first heard it and it has become my voice … offering rhythm and melody to the listener.”