The action came amid reports that Harlem [African-Americans] planned to join student sit-ins that were continuing in two campus buildings.

The tension continued despite the release of Henry Coleman, acting dean of Columbia College, and two associates. They had been held in Coleman’s office in Hamilton Hall since Tuesday afternoon. Students revealed them at 3:30 p.m. yesterday.

Last night about 150 faculty and administration members voted to ask that all work be stopped on a gymnasium in Morningside Park pending further discussions with community leaders on the controversial gym.

(Originally published by the Daily News on April 25, 1968. This story was written by Edward Benes and Arthur Mulligan.)

In his new book, Billie Holiday: The Musician and the Myth (Viking), jazz historian John Szwed, who also penned books about Miles Davis and Sun Ra, tells the story of one of America’s greatest artists who would have celebrated her 100th birthday on April 7. Here are 10 things you may not have known about the singer they called Lady Day:

2. Holiday dropped out of school in the fifth grade and found a job running errands in a brothel.

3. At age 12, she and her mother moved from Baltimore to New York City’s Harlem, where she was eventually arrested for prostitution.

3. Holiday sought work as a dancer at a Harlem speakeasy. There were no openings for dancers, so she auditioned as a singer.

4. She was completely self-taught as a singer, describing her style as “a mixed up thing. You just have to feel it.”

“Without education, you’re not going anywhere in this world,” Malcolm X once said.

Tuesday, grassroots activists from throughout the tristate area will commemorate the remarkable legacy of one of Harlem’s greatest advocates for Black people to be a self-determining community. A number of local events have been scheduled for May 19 to acknowledge the 90th anniversary of Malcolm X’s physical birth and 50th annual cycle of an exclusive cultural ceremony commemorating his legacy.

Beginning Tuesday morning, Malcolm X’s Organization of Afro American Unity will sponsor the annual pilgrimage to where his and his wife Betty’s bodies are interred, Ferncliff Cemetery in Hartsdale, N.Y. 1831 (April 25). Started as a humble street railroad using horses for motive power, it eventually grew to reach Westchester, Putnam, Dutchess, and Columbia counties, and is the origin of today’s Harlem Line.

We’ve posted many things about the history of the Harlem Railroad over the years, so if you’re interested in taking a walk down memory lane, be sure to check some of these old favorites out:

Nordstrom Rack could be opening up at Jeff Sutton’s 100 West 125th Street. A recent rendering of Sutton Wharton Realty’s retail project, also known as 291 Lenox Avenue, showed that the six-story, 200,000-square-foot shopping complex will have a Nordstrom Rack on the second floor, the New York Post reported. A spokesperson for Nordstrom, however, denied that the company signed a lease, according to the newspaper.

What Will Happen When Harlem Becomes White? Get off at 125th street’s A subway and walk south. As you go, you will spot luxury condominiums in between brownstones and walk-ups. If you want to, you can stop off at a designer flower store or a hat boutique. On your walk, you will almost certainly spot more than a few white, middle-class-looking faces – something that would have been inconceivable 20 years ago.

Couples can now be spotted in and out of bars and restaurants along Frederick Douglass Boulevard, locally renamed “restaurant row”. Outside of 67 Orange Street, a small craft cocktail speakeasy, reality television crews have been known to ask customers to sign off releases so that their faces can be used on film. The bar is a staple of Harlem’s “new” renaissance, where young, hip, black customers have adopted local venues to spend their downtime.

On the “A” w/Souleo: Dance Exhibition Celebrates ‘Firsts’ While Looking to the Future Luther King, Jr.’s 1968 assassination. There was the body of a civil rights leader shot down, and rising from that tragedy would be the bodies of young and motivated African-American dancers ready to lead the charge of challenging racism head-on in the world of dance. The exhibition Dance Theatre of Harlem: 40 Years of Firsts, on view at the Reginald F. Lewis Museum in Baltimore, Maryland presents this groundbreaking dance company’s story.

“This is a culture interested in bodily expression and when Arthur Mitchell began there were foolish stereotypes that blacks couldn’t do classical dancing with our bodies. It was about shattering that barrier,” said the museum’s executive director, A. Skipp Sanders. “That type of perseverance is happening now too as we look at what’s going on in today’s movements with our younger generation. Every chance to point that out is a chance to tell truth to power.”

June 2, 2015 – 12pm – Jay Rodriguez is a Grammy-nominated Saxophonist, Flautist, Clarinetist, Film Composer, Producer and Arranger. He studied under a full scholarship at the New School for Jazz and Contemporary Music, co-founded by Arnie Lawrence, who said, “Mr. Rodriguez is more than a musician. He is a visionary… and a true light to hear and see.” Jay is the consummate artist; his resume reads like a Who’s Who of the music world. He has performed, produced recorded and/or arranged for artists like Elvis Costello, Roy Hargrove, Bobby Sanabria, Musiq Soulchild, Natalie Cole, Melissa Manchester, Patti Labelle, Arturo O Farrill, Bernie Worrell, The Mingus Big Band, Al Macdowell, Kenny Barron, Mongo Santamaria, The Gil Evans Band, Celia Cruz, Doc Cheatham, Miles Davis, and Prince amongst many. He has taught/lectured all over the world including the Royal Academy of Music in Denmark, Berlin, Estonia, Japan, University of Cairo, Uninorte in Colombia and Unam in Mexico. Jay has been a guest on the Jimmy Fallon Show with The Roots as a soloist for English sensation singer/songwriter Michael Kiwanuka and Jim James of My Morning Jacket. Jay co-founded the NYC phenomenon, the Groove Collective, which influenced many modern hip hop and dance music bands.

Stephanie St. Clair was born in Martinique, an island in the East Caribbean in 1886 and came to the United States via Marseilles, France. In 1912 she arrived in Harlem. She was known for her deep involvement in the seedy gangster underworld. According to those who knew her, she was arrogant, sophisticated and astute to the ways of urban life. She reportedly told people that she was born in “European France” and was able to speak “flawless French” as opposed to the less refined French spoken by those in the Caribbean. Whenever people questioned her national origin, she would always respond in French. St. Clair also spoke Spanish.  Noted for her fierce temper, St. Clair spouted profanity in various languages when angered or outraged by some perceived slight or injustice. Her eloquent sense of fashion was well- known throughout Harlem where she was referred to as Madame St.Clair.  In in the rest of Manhattan and other city boroughs, she was referred to as “Queenie.”

St. Clair developed the first numbers bank located in Harlem. Here she and her partners, including Ellsworth “Bumpy” Johnson, made the first significant criminal fortunes in black New York.  Initially they had little competition except for rival Casper Holstein but by the 1930s their undisputed control over Harlem’s numbers rackets was challenged.  After the Great Depression began and Prohibition ended in 1932, a number of white New York mobsters saw their profits rapidly diminish. They turned to the lucrative Harlem illegal gambling scene to supplement their loss revenue. Led by Dutch Schultz, a coalition of non-Harlem gangsters engaged in a bloody war with St. Clair and her allies for control of organized crime in that community.  Over 40 people were killed in gangland related violence including often the murder of Harlem numbers operators.

The jazz lounge from Nobu co-founder is still in the works. 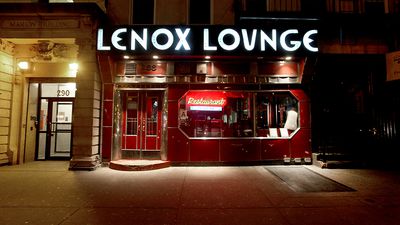 It looks like Nobu co-founder Richie Notar’s longtime dream (and legal battle) to open a jazz venue in the iconic Lenox Lounge space has, finally, officially come to an end. But, the restaurateur has found another space on 125th Street, where he plans to open his jazz lounge, reports Gael Greene. All of this also means that the Lenox Lounge, with its original fixtures, is potentially up for grabs again, two years after it closed its doors for good. Meanwhile, Lenox Lounge’s owner Alvin Reed was supposed to be reviving the nightclub at 333 Lenox Avenue, but that project seems to have been dead in the water since running into money troubles last year.

As of a year ago, Notar planned to work with actor Dwight Henry from 12 Years a Slave, to open Mr. Henry Bakery, inspired by Dwight’s New Orleans spot Henry’s Buttermilk Drop. There’s no word yet if the shop, which has an old website that says it’s opening next to the Lenox Lounge, is still a go.